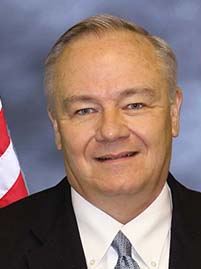 Chuck Rapp began his career with the Baltimore County, Maryland, police department. He served in numerous patrol and detective assignments and progressed to the rank of Captain. He was also a hostage negotiator and team leader for over ten years. He commanded precincts, criminal investigations, training academy, and served on a terrorism task force as commander of the state’s intelligence center — Maryland Coordination and Analysis Center. After 27 years, he retired.

Chuck left this position to accept a Major’s position with the Carroll County Sheriff’s Office — a full-service law enforcement agency where he has overseen investigations, special response units, and patrol operations and currently oversees the Professional Services Division, which includes personnel, training, and policy functions for law enforcement and corrections.

Chuck has a bachelor’s degree in economics and political science from the University of Maryland and a master’s degree in administrative science from Johns Hopkins University. Chuck has been an instructor in undergraduate, graduate, and specialized law enforcement courses for over 20 years.