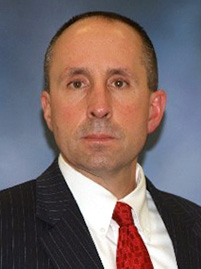 Thomas P. Souchek retired as the director of New Jersey’s Fusion Center, the Regional Operations & Intelligence Center (ROIC) in 2011 at the rank of major after 26 years of service. Prior to this assignment, he served as the executive officer for the Field Operations and Administration sections and as the commandant of the New Jersey State Police Academy. As commandant, he developed, implemented, and measured training programs that covered such topics as police reform, the Federal Consent Decree, leadership, supervision, change management, hazing, ethics, and cultural awareness.

Thomas holds a bachelor's degree in political science from Richard Stockton College, as well as a master’s degree in education administration and supervision and a certificate in human resources training and development from Seton Hall University. He also graduated from the Northwestern University School of Police Staff and Command and has been honored with the Franklin M. Kreml Leadership Award.

Since his retirement from active duty, Thomas has lectured to state and local law enforcement officers at both the academy and post-academy and has taught classes for Penn State's Justice and Safety Institute (JASI).